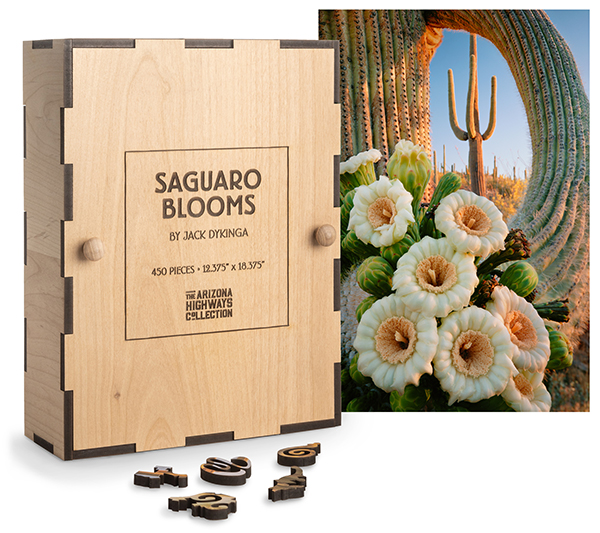 See More Photos
Longtime Arizona Highways contributor Jack Dykinga has been based in Tucson since 1976, when he moved there after a newspaper career in his native Chicago that included the Pulitzer Prize for Feature Photography. Later turning his attention to landscape and nature photos, Dykinga has produced some of the most enduring and iconic images of Arizona and the American Southwest.

The photo used for this puzzle shows a cluster of saguaro cactus blossoms at Saguaro National Park, near Tucson. In 2015, Dykinga donated a print of this photo to St. Joseph’s Hospital and Medical Center, the Phoenix facility where he had received a lifesaving double lung transplant the previous year. “You sort of assume that [saguaro blossoms] all bloom at once, but they don’t,“ he said then, so he had waited for the right opportunity to make the photo. “I was a voyeur to flowering in the desert,” he said, adding that for him, the photo symbolizes “a chance at new life.”

Dykinga’s image, Saguaro Blooms, has been turned into a stunning, collectible 450-piece wood puzzle. Made for Arizona Highways by Whimsy Wood Puzzles in Phoenix, this limited edition puzzle comes packaged in an attractive wooden box.

Our Authentic Arizona products celebrate the spirit of the Grand Canyon State, along with the exceptional creativity of Arizona-based artisans and businesses.